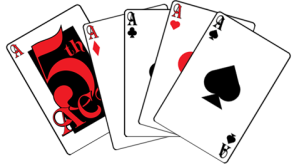 Good evening to the one or two people who will actually be reading this post! Since I have started a blog site, I should probably get to blogging.

If by some miracle you happened to know what I was doing two years ago (I certainly didn’t), you might find the title of this entry slightly familiar. Well, back in 2013 I got the ambitious idea in my head to do a weekly animated video blog called Bottom of the Deck, espousing stuff about geeky things I considered interesting. I barely made it past the first month before I realised that with my skillset at the time and all the other work I was trying to juggle, it just wasn’t going to happen.

So now I have an opportunity to revitalise Bottom of the Deck, but in a more manageable format that won’t send me into a tailspin, as I’m busier than I ever was before. I’ll try to put out an update every Tuesday; the rest of the week will soon start filling with other stuff (mysterious vague foreshadowing…)

Speaking of Tuesday updates, there’s a show I’m watching right now that just uploaded its seventh episode, so I’ll use it as my geeky topic for this week. For anyone who likes tabletop gaming, there’s no excuse for not knowing about Wil Wheaton’s web series Tabletop, on the Geek and Sundry Youtube channel. Even more specifically, there’s the spinoff mini series known as Titansgrave: The Ashes of Valkana. I highly recommend it for anyone who has so much as had a passing thought about taking part in a pen-and-paper role-playing game, as it perfectly encapsulates everything you need to know about playing one in an easy to follow format. With the venerable Wil Wheaton himself running the show as Game Master, veteran actors Hank Green, Alison Haislip, Laura Bailey and Yuri Lowenthal take on the roles of adventuring heroes in the war-torn ruins of Valkana, a world where advanced technology and magic are commonplace. Armed only with their character sheets and a handful of dice, these four vagabonds make the show incredibly fun to watch thanks to their chemistry both in and out of character, and by attempting to outsmart the obstacles that Mr. Wheaton throws at them with sadistic glee. Throw in some gorgeous artwork to aid the narration and Titansgrave comes to life before your eyes.

That’s my geeky ramble for this week, go check out Titansgrave on the Geek and Sundry website through this link here, and I’ll see you all again soon.