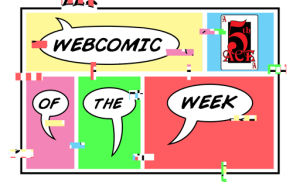 Happy Wednesday everybody, if you are the sort of person who holds a special place in your heart for the middle of the week. The true significance of it to me is simply to refer you all to a newly discovered webcomic. Going to slap a warning on you right now: this week’s webcomic contains scenes with violence, gore, disturbing twisted monstrosities and strong language. Mature readers only, folks!

This comic with a disturbingly diverse range of deviance is Demon Hunter Kain, by Burrell Gill Jr. It follows the story of two characters: Zandalee, a high school student plagued by terrifying hallucinations despite her medication, and the titular Kain, a boy with a tragic past and the power to battle demonic invaders. Match made in heaven, right? The scene is set with Zandalee attending her first real day of school in four years, having spent the intervening time hospitalised and medicated for her schizophrenic visions. It isn’t long before she starts seeing things lurking around her school, and her less-than-subtle reactions to them immediately brand her as weird and disturbed. But when the supposed hallucinations start attacking her, only the intervention of Kain saves Zandalee’s life, and helps her understand that she isn’t insane.

The first thing I really want to praise regarding Demon Hunter Kain is the artwork. For a story as dark as this, one could easily have done it as a stark, dramatic, tonal piece with plenty of shadows. On the contrary, the pages are fully coloured in a western-manga style, allowing the reader to see every horrific detail of the gruesome abominations that Kain fights, and the intense emotion on the characters’ faces. Gill Jr. has a flair for the monstrous, and while the demons never reach a Clive Barker level of horrific, they will easily make your face crumple in disgust. The human characters are equally well designed, everyone has a distinct look that is recognisable at a glance. The two leads both have tragic backstories that feed into their current lives; Kain’s guilt over past mistakes and his relative inexperience with demon hunting make him driven to prove himself to his superiors, while Zandalee seeks to learn more about why she is able to see things no-one else can and, for the first time in her life, have a real friend.

Demon Hunter Kain was initially a title I found on a list of webcomics that I thought sounded just corny enough to be good, and I was right, albeit for the wrong reasons. What I thought would be an over-the-top, angsty drama turned out to be an intense, character-driven urban fantasy that I am thoroughly enjoying. The comic updates on Mondays and has archives dating back to 2011, so set aside a few hours and prepare your stomach; it’s a wild ride.

That’s all for this week, go check out Demon Hunter Kain right here, and if you can recommend any webcomics for me to binge and review, let me know in the comments.

2 thoughts on “Webcomic of the Week – DEMON HUNTER KAIN”